Let me introduce you to Bobo. A loveable chimp who is just the right mix of silly and serious.

Bobo searches for
his very own embrace. 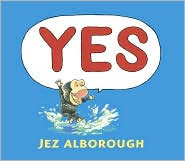 Bobo says "yes, yes"
to bathtime and
"no, no" to bedtime.

Bobo feels happy
and secure in being
small.

Emmy LOVES Bobo. Just the other day we were out enjoying dinner when Emmy got down from her chair and went to her Daddy and said "Tall!" He put her up on his shoulder. She then got down and came over to me and said "Hug!" and gave me the biggest squeeze. She continued to do this for several minutes and despite stares from other diners, we let her. You would too if you saw the smile on her face as she reenacted the stories of Bobo. Jez Alborough, the author and illustrator, has this to say about his first Bobo book titled Hug.
"In my book Hug it became clear to me that my story was best told by the pictures (I cut the text down to only three words!) This meant that the pictures had to carry most of the story development. The expressions on the character’s faces, the body language, the colours, the compositions all had to work together to give the information which the child would need to engage emotionally with the twists and turns of the story."

Jez Alborough successfully conveys important topics in a young child's life in all three of his books (Hug, Tall, Yes) about Bobo through the use of very few words and wonderfully drawn pictures. I believe most parenting experts agree that fewer words create more meaningful interactions with children so hats off to Mr. Alborough and his cute chimp Bobo.
Posted by Amy Pertl-Clark at 1:59 PM