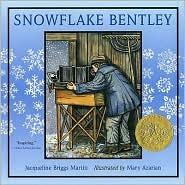 Emmy and I are in awe of the man who discovered that no two snowflakes are alike. His name was Wilson A. Bentley and his magnificent discoveries regarding snowflakes can be found in the book Snowflake Bentley written by Jacqueline Briggs Martin and illustrated by Mary Azarian. Snowflake Bentley won the 1999 Caldecott Award for the most distinguished picture book of the year. The illustrations give an old world feel and a true understanding of the Vermont landscape as Ms. Azarian lives just an hour away from Wilson Bentley's home. Her use of woodcuts to create the illustrations is simply divine. Ms. Martin pays tribute to Wilson Bentley through her storytelling. About Wilson Bentley, she says: "He saw beauty where no one else had noticed it - and he was determined to show others that beauty. His vision and his single-minded pursuit of his goal, as well as his belief that the 'treasure' was in the beauty of snow, not in money - all made him one of my heroes."
Here's a bit about Wilson Bentley: He grew up in the late 1800's on a farm in Vermont where the average snowfall is about 120 inches. His happiest days were snowstorm days. When his 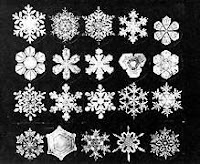 mother gave him an old microscope, Willie began catching single
snowflakes and studying the ice crystals. He wanted to find a way to save the snowflakes so that others could see their wonderful designs so for three winters he tried drawing the snow crystals, but they always melted before he could finish. He did manage to draw a hundred snow crystals each winter for three winters! Willie's study of snow really got going when his parents helped him to buy a camera with its own microscope. Through trial and error, he photographed more than 5000 snowflakes during his lifetime (his first in 1885) , not finding any two alike. The 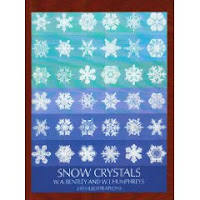 photographs attracted world attention and made Wilson Bentley a pioneer in the area of photomicrography. Two thousand of these clear photomicrographs are printed in a wonderful book titled Snow Crystals. This book will amaze you and have you looking at snowflakes in a completely different way!!! 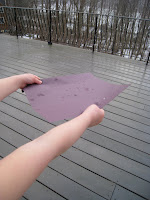 After reading Snowflake Bentley, Emmy and I put black paper near the back door so that when the next snow fell, we would be ready to try to capture snowflakes just like Wilson Bentley. Although the snowflakes were quick to melt, Emmy and I were able to see the detail in the flakes and appreciate Mr. Bentley's work even more.
Posted by Amy Pertl-Clark at 10:56 AM 2 comments:

I've always loved the following quote by Pablo Picasso:
Every child is an artist. The problem is how to remain an
artist once we grow up.
Being able to express oneself freely is the basis for a society where individual differences are admired and revered. Art allows a person to tell his or her own story. Instilling this ideal into our children will enable them to create a future where art is accessible to everyone no matter their wealth, skin color or education.
Look! Look! Look! is written by two people with a passion for art education. Nancy Elizabeth Wallace and Linda K. Friedlaender (curator for the Yale Center for British Art)

create a wonderful celebration of art seen through the eyes of three adorable mice. Upon discovering a postcard in the people's house, they decide to borrow the postcard "just to look at it, just for a little while." The mice look at the postcard (Portrait of a Woman 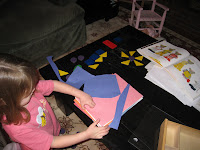 by Robert Peake) from "top to bottom, side to side and bottom to top." They see patterns,
colors, lines and shapes and then they create with paper, scissors, and markers. Emmy delights in the discoveries of the mice. She immediately wanted to create her own artwork after the very first reading. She used pattern blocks to create a number of objects and then decided to cut out her own shapes and lay them out on paper in a variety of ways.
Emmy has quite a collection of art materials. Making them accessible to her at all times was a challenge that I was determined to solve. This is one way to keep art materials within arm's 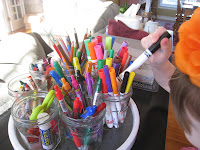 reach. Emmy and I purchased a small lazy susan and placed the jelly jars that we cleaned and saved on top. Then we filled the jars with drawing materials such as markers, crayons, pens, colored pencils and "regular" pencils (as Emmy calls them) as well as 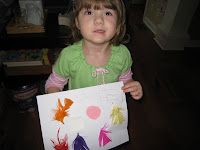 scissors, glue and a handheld pencil sharpener. We keep this collection on the sofa table along with a box that holds different colors and sizes of paper. We also have a cabinet in the office that has a shelf dedicated to art materials like the feathers shown on Emmy's piece of art to the right. Emmy uses either her small table and chairs or the coffee table to create these fabulous pieces of art. 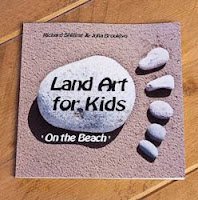 Finding art all around you is an important concept to teach
children. Here is a wonderful resource that I recently came across showing how to use objects in nature to create art. Land Art for Kids was created by Richard Shilling and Julia Brooklyn who are known as Land Artists. Land Art involves making art and sculptures using materials you find in nature such as leaves, pine cones, twigs, pebbles, rocks, sand, and shells. To see wonderful creations of Land Art, check out the website Land Art for Kids.
An earlier post, For the Love of Art, has additional books and resources for creating art that may be of further interest.
What art offers is space - a certain breathing room
for the spirit. ~ John Updike
Posted by Amy Pertl-Clark at 6:48 AM 1 comment:

Email ThisBlogThis!Share to TwitterShare to FacebookShare to Pinterest
Labels: art

With the winter cold air comes time for snuggling up with a good book! Here are two of Emmy's favorite picks for books that are just right for snuggling.
Winter is the Warmest Season by Lauren Stringer is an enjoyable book that helps the reader see that although the temperatures may be colder in winter, there is a lot of warmth to be found. At first the idea of 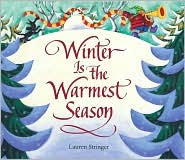 winter being warm was confusing to Emmy, but as we looked at the marvelous artwork in this book it began to make perfect sense. It helped that we tried out some of the suggestions in the book such as: feeling the puffiness of our winter coats, burying ourselves under the blankets on Emmy's bed, sipping hot chocolate, eating grilled cheese sandwiches, and wearing pajamas with feet.
When winter comes, my jacket puffs warm with feathers, my hat grows earflaps, my pants hide deep in fuzzy boots, and my hands wear warm wooly sweaters.

Ms. Stringer shares how she got the idea for this winter book: "Since my children were born, I have kept notes on things they have said and done that delight and surprise me. I had no idea on one hot, steaming summer day when my six year old son turned to me and said, “Winter is the hottest season ‘cause everybody drinks hot chocolate and wears warm clothes, and sits in front of hot fires,” that his interesting logic would turn itself into a picture book!" Writing down your children's thoughts in an ongoing journal is such a great idea. Maybe one day these pieces of wisdom will become ideas for a future children's book.

Next on Emmy's list is Tracks in the Snow by Wong Herbert Yee. With simple words and illustrations,

Yee takes us on a little girl's adventure to find out who made the tracks in the snow.
Just outside my window, there are tracks in the snow. Who made the tracks? Where do they go?
Now when we venture out into the snow, our eyes are looking for tracks and wondering what creature might have made them. We enjoy making our own tracks and noticing that Mommy's tracks are bigger than Emmy's. Although Emmy will often say that her tracks are the biggest. 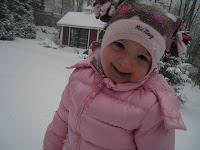 Falling Snow
See the pretty snowflakes
Falling from the sky;
On the wall and housetops
Soft and thick they lie.
On the window ledges,
On the branches bare;
Now how fast they gather,
Filling all the air.
Look into the garden,
Where the grass was green;
Covered by the snowflakes,
Not a blade is seen.
Now the bare black bushes
All look soft and white,
Every twig is laden,
What a pretty sight!
Posted by Amy Pertl-Clark at 12:32 PM 1 comment:

Books for New Babies and Parents, too! ~ Continued

I knew this would happen! Creating a list of books with a specific theme is never complete. As Christmas came and went, many more books were found that could have been added to our Christmas favorites. As I rotate the books in Emmy's baskets, I came across two more books that would also make wonderful gifts for new babies and their parents, too that I just had to share.

Ten Little Fingers and Ten Little Toes is a delightful book meant to be read aloud over and over again! It was created by two beloved picture book creators - the storyteller Mem Fox and the artist Helen Oxenbury. Fox starts each verse with a rhyming couplet about two babies in different places and ends with a rhythmic refrain:
Both of these babies, as everyone knows, had ten little fingers and ten little toes.
Oxenbury brings each pair of babies to life using watercolor illustrations. To establish distance and difference, she paints the places where the babies are born on separate pages and then brings them together on the next page using a white background. A playgroup emerges as each pair of babies is introduced until a multinational group has grown.

If you'd like to know more about the collaboration between author and artist then click here to watch a video of Mem Fox talking about Helen Oxenbury.

Here are my favorite fingers and toes! 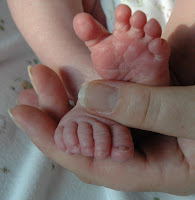 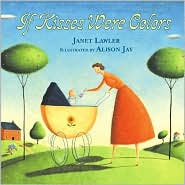 If Kisses Were Colors by Janet Lawler with illustrations by Alison Jay brings wonder to the ear and the eye with its metaphors and oil paintings.
If kisses were snowflakes, your world would be light, sparkling with crystals of silver and white.
Ms. Lawler was inspired to write this story after the adoption of her daughter, Cami, from Vietnam in 1998. "This 'mother's love poem' expresses my boundless love for both my children, to whom it is dedicated."
This is a book of timeless beauty and charm that deserves to be shared with every mother - young or old!
Posted by Amy Pertl-Clark at 1:39 PM 1 comment: