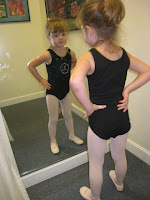 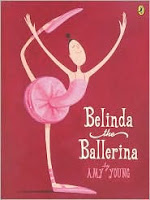 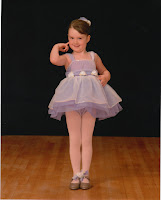 Happy dancing everyone!
Posted by Amy Pertl-Clark at 3:10 PM 6 comments:

In the Garden: Who's Been Here? 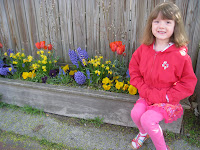 Spring has arrived! Every shop in our little town has flower boxes full of the most colorful and fragrant flowers. Emmy and I stop and smell the flowers every day on our way to and from school. We also marvel at the blossoms on the trees. So beautiful!

When we went to the library, we asked the librarian to suggest a book for Spring and she recommended Lindsay Barrett George's In the Garden: Who's Been Here? 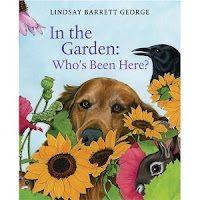 Perfect! Two children, Christina and Jeremy, and their dog, Sonny, are sent to pick vegetables in the garden where they discover quite a few other creatures who have already been to the garden that day.

George's illustrations are so realistic that you really feel a part of the story. Emmy's favorite page is the one with the chipmunk nibbling the seeds in the sunflower.

"Christina looks down into a large sunflower. Something's
been eating the seeds in the middle of this sunflower.
I wonder... Who's been here? A chipmunk."

Emmy loves giving a guess after the repetitive phrase I wonder...Who's been here? and is delighted to turn the page and discover the two page spread showing a close up of the creature and the plant.

This is George's fifth book in the Who's Been Here? series. The first three starred George's own children Campbell (Cammy) and William and are each set in nature surrounding their home (woods, snow, pond) giving the reader a wonderful sense of the great outdoors. The fourth in the series has a slightly different format as it follows a teacher who is traveling the world and reporting back to her students through letters, sketches and maps. Each book in the series has a reference page at the end highlighting the animals giving the reader even more information.

If your child loves nature, then these books would be perfect.

In the Woods: Who's Been Here?

In the Snow: Who's Been Here?

Around the Pond: Who's Been Here?

Around the World: Who's Been Here?

Here are a few songs about gardening that Emmy and I have been enjoying!

Little Seed (tune: I'm a Little Teapot)
Here's a little seed in the dark, dark ground.
(crouch on the ground)
Out comes the warm sun, yellow and round.
(stand up and connect hands over head)
Down comes the rain, wet and slow.
(flutter fingers and slowly squat down)
Up comes the little seed, grow, grow, grow!
(jump up - jump, jump, jump)

Plant Your Seeds (tune: Row Your Boat)
Dig, dig, dig the earth
(make digging motion)
Then you plant your seeds
(pretend to drop seeds)
A gentle rain
(flutter fingers down)
And bright sunshine
(circle arms above head)
Will help your flowers grow.
(squat down and stand up raising arms above head)
Posted by Amy Pertl-Clark at 1:43 PM 2 comments: