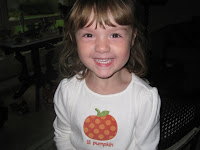 Emmy and I cannot say enough fantastic things about James Mayhew and his Katie books. If anyone is planning a trip to London then be sure to get a copy of Katie in London beforehand and use it to prepare for the trip as well as keeping it handy as a guide to the city. If you'd like to learn more about the author and his books check out Mr. Mayhew's blog Katie's Picture Show. Emmy and I are very excited to begin reading about Ella Bella Ballerina and follow her adventures into the world of music and dance. For more information, go to Mr. Mayhew's other blog Ella Bella Ballerina.
Posted by Amy Pertl-Clark at 12:32 PM No comments: 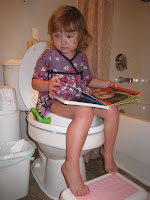 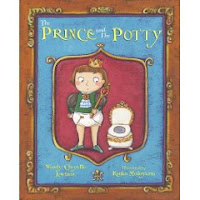 For the boys out there, Ms. Lewison also wrote The Prince and the Potty. This time the royal wise man suggests getting the boy a puppy. As the puppy learns how to to do its business on a cloth, the prince is inspired to use his potty after all.
Posted by Amy Pertl-Clark at 2:21 PM No comments: 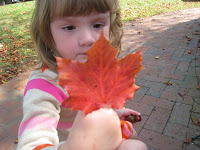 Autumn is my favorite season and it seems that Emmy is feeling the same way. The leaves are so vibrant here in New England that they just take our breath away. Emmy looks up into the trees and wishes for pink leaves since pink is her favorite color.

There are a large number of books written about Autumn and many are favorites, but to help those that get overwhelmed with a long list (I'm mostly speaking about myself), Emmy and I would like to focus on just two. 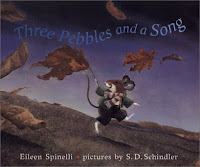 Our second favorite Autumn book is Three Pebbles and a Song written by Eileen Spinelli. Known for her poetry, Eileen's words float off the pages beginning with... "Across the moonlit fields crackly old leaves twirled and skittered." Please, please, please read this story with your child and allow the conversation of how children contribute to their family's happiness, in their own special way, just as Moses the mouse contributed to his. Moses' contributions for winter may not have been practical, but through song, dance and juggling, Moses helped his family embrace their own creativity so much so that only Moses detects the arrival of spring. I love the subtle message of celebrating art's powers to invigorate and to sustain. Emmy likes when Moses finds a patch of pebbles and tosses them into the air, Catch-a-toss-catch.

I am always interested in how authors get their ideas for books and so would like to pass along how Eileen came up with the story for Three Pebbles and a Song.

"Sometimes I'm so eager to get to work that I don't take time to get dressed in the morning. I just run upstairs in my nightie, with a cup of tea and an idea or two. Such was the morning I began Three Pebbles and a Song. I looked at the trees outside my window. They were turning red and gold. I heard geese honking across the pond. I thought of how much I loved the changing of the seasons. How much I enjoyed getting ready for each one. Summer: dust the patio furniture. Spring: plant my herb garden. Fall: scour soup pot. Winter: play my Christmas cd's. I thought, too, about how important the arts are in all the seasons of my life.
I thought about my playful--but unsuccessful--attempts at juggling.
And I put the thoughts into words. And it was a good day."
If you are interested in developing your child's love for poetry, try this...Make copies of seasonal poems for your child and roll them up scroll-like and tie with a ribbon - orange for Autumn, red for Valentine's Day, etc. Lay the scroll beside your child's bed or on their breakfast plate and make the finding a true celebration. Jump for joy, light a candle and have a special poetry reading. Keep the poems in a binder or folder to go back to on a cold and rainy day.

By the way, Eileen's husband is also a writer! Check out Jerry Spinelli's book Stargirl (suitable for tweens and teens) - a story about a high school student who is startlingly different from everyone else. If you're like me, you'll LOVE Stargirl, given name Susan, and maybe even be inclined to start a Stargirl Society.
Posted by Amy Pertl-Clark at 5:07 PM No comments: