In my last post I shared how book characters can become very creative costumes for Halloween or for Children's Book Week.  Since that time, I sat down with my little reader and asked her to remember some of her favorite picture book characters and then we discussed which of these characters would make interesting costumes.  Here are seven of Emmy's choices: 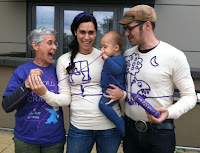 1)  Harold and the Purple Crayon by Crockett Johnson 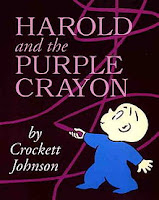 Emmy has always loved the adventures that Harold went on through his purple drawings.  She said that this costume would be easy to put together. "Well, just get a white shirt and draw on it with a purple fabric marker and then carry a purple crayon around with you." Here is a really cute image that I found on the  web that shows how this could become a family costume. 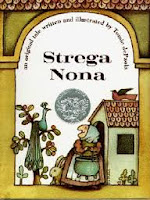 Strega Nona has been a favorite character of Emmy's for a long time.  When she was very little and we were cooking butter noodles or spaghetti for dinner, she would always say "Enough, enough pasta pot!" and would blow three kisses into our magic pasta pot.  Emmy suggests wearing a long dress with an apron, a scarf on your head and carrying a pot with yarn for noodles. Here is the most adorable image of this costume idea!
3)  A Bear Called Paddington by Michael Bond 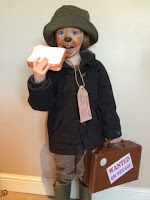 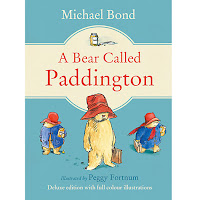 The friendly bear from deepest, darkest Peru with his battered suitcase and duffle coat would make a super cute costume according to Emmy.  Grab a blue coat, a red hat and a some sort of suitcase and you are all set.  Oh, don't forget to pack a marmalade sandwich!"  Here are two inspiring images for this fun costume. 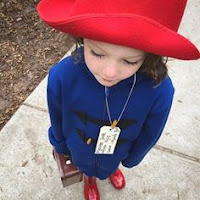 I love this book for its portrayal of a strong girl character who just happens to be a princess.  Emmy loves the reversal of the princess and the prince role.  After the prince tells the girl to go home and come back when she looks more like a princess, Emmy would always exclaim quite loudly,  "That Ronald is a real bum!  I'm glad Elizabeth didn't marry him."  I agree!  Here is Emmy's advice on how to create a Princess Elizabeth costume:  wear a white or black long sleeved shirt and leggings then get a large brown grocery bag and cut out holes for your head and your arms and wear this over your clothes, be sure to make a princess crown out of yellow paper. Check out this cute image! 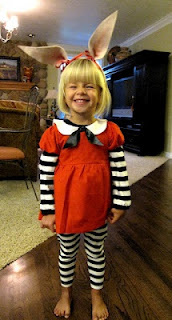 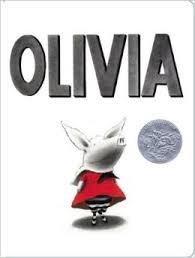 When Emmy was little, we would read the book Olivia over and over again. Her favorite page was the one that showed Olivia getting dressed in all of her red outfits.  Whenever Emmy wore red she would claim to be Olivia.  If you are interested in this costume then Emmy suggests to get a headband and attach pig ears, paint your nose with a pink circle and two black slots to look like a snout, then wear black and white striped leggings, a red dress, black shoes and be sure to accessorize with a red bow and a red pair of sunglasses! Here's a picture for inspiration.

6)  Caps for Sale by Esphyr Slobodkina 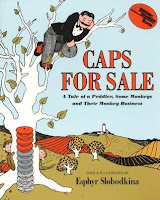 Emmy would laugh and laugh at the monkeys in this book.  She loved to repeat the sound that the monkeys made and could often be found putting all of her hats on her head and saying rather loudly, "Caps, caps for sale.  Fifty cents a cap!"  Here is Emmy's idea of how to become the peddler in this story - wear grey pants and a black jacket with a bow tie, stack as many hats as you can on top of your head (use safety pins to attach them together), draw a mustache above your upper lip and carry a stuffed monkey or two around with you.

7) The Jolly Postman by Allan and Janet Ahlberg 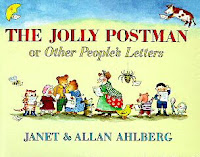 Delivering mail was always one of Emmy's favorite activities when she was little.  She would find one of my purses and put it on like a mail bag and fill it with papers that she had drawn on.  She would then pretend to deliver the mail all over the house.  After we read The Jolly Postman, her play became a retelling of this story as she created letters to nursery rhyme and fairy tale characters and delivered them "all across fairy tale land" as she called it.  Emmy suggests that you wear a big blue coat or shirt, a red and white striped scarf, a blue hat and boots.  Be sure to fill a mail bag with letters and maybe even walk your bike with you!  Here is a photo that should get your creative juices going.

We hope that you are inspired by our book character costumes and would love to hear your ideas, too!  Leave a comment and let's see if we can grow this list of costume ideas!
Posted by Amy Pertl-Clark at 12:44 PM