The Caldecott Medal is awarded annually by the Association for Library Service to Children (ALSC) to the artist of the most distinguished American picture book for children published the preceding year.  This medal was named in honor of nineteenth-century English illustrator Randolph Caldecott.  Together with the Newbery Medal (awarded to the author of the most distinguished contribution to American literature for children), it is the most prestigious American children's book award.

Emmy and I had a discussion about the Caldecott Medal after our reading of Make Way for Ducklings.  Now she always looks at the front cover of books to see if they have the gold sticker.   "Did this one win a golden sticker?"  "What about this one?"  "Oh Mommy, these illustrations are gorgeous, let's give this book a medal!"

Here are the most recent Caldecott Medal winners: 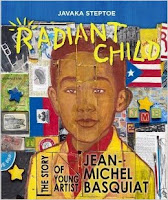 (2017) Radiant Child: The Story of Young Artist Jean-Michel Basquiat ~ illustrated and written by Javaka Steptoe
Steptoe is the perfect match to showcase the bold collage artwork of Jean-Michel Basquiat.  Both artists create paintings that are full of vitality and strength through interesting materials and methods. Steptoe's illustrations tell the story of Basquiat as a young boy who sees art everywhere through the color, noise and drama of New York City.  As Emmy and I looked through this gorgeous book, we were reminded that art doesn't have to be neat to be beautiful.  We thought about how coloring outside of the lines can be the most interesting.  Through our research on Basquiat, we will remember him saying, "I don't think about art while I work, I think about life."  As Emmy has been very interested in grafitti, or street art as we like to call it, this book really resonated with us.  We found a nice collection of Basquiat's artwork HERE.  We then both realized that we have a book in our collection that has Basquiat's artwork in it ~ it's Maya Angelou's Life Doesn't Frighten Me. 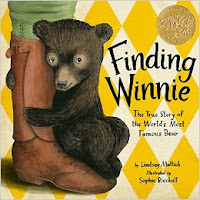 (2016) Finding Winnie:  The True Story of the World's Most Famous Bear ~ illustrated by Sophie Blackall and written by Lindsay Mattick
Blackall's gorgeous watercolor paintings help Mattick to tell the tale of her family's unique connection to the world's most famous bear Winnie-the-Pooh.  Most of us know the story of how A.A. Milne created his classic Winnie-the-Pooh stories based on his son Christopher Robin and his menagerie of stuffed animals, but not many know the early story of the bear named Winnie who was visited by Christopher Robin at the London Zoo.  Winnie's story began way before that in the year 1914 at a train station in White River, Ontario where a man by the name of Harry Colebourn noticed a bear cub tethered to a bench.  A $20 payment to the man on the other end of the tether and a beautiful friendship between man and bear began.  The fact that this tale is told by the great granddaughter of Colebourn and ends with photographs and documents that trace the tale to its history makes it all that more endearing.  If you have a moment, read this post on Blackall's blog where she explains her thoughts and feelings as the day of the Caldecott Award announcements creeped closer.  Trying to put some of these feelings into words

(2015) The Adventures of Beekle: The Unimaginary Friend ~ illustrated and written by Dan Santat.
Think about an island where imaginary friends are born and patiently wait to be imagined and named by a human child, but what if there is an imaginary friend who doesn't want to wait and embarks on an adventure to find his true friend on his own...enter Beekle a small white creature reminiscent of a marshmallow with an orange crown on top of his head. With incredible artwork and riveting words, Santat's story of friendship is an ode to creativity.  With Beekle resembling a blank piece of paper and Alice creating the story to fill up this paper, the two finally meet and the creativity begins.  Click here to view a beautiful video on YouTube highlighting this most extraordinary book. 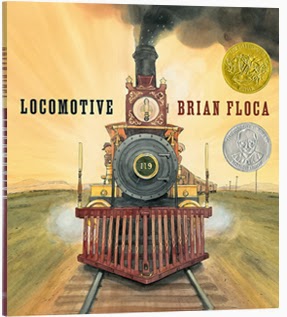 (2014) Locomotive ~ illustrated and written by Brian Floca.
Combining the simple and the intricate, Floca creates a picture book full of rich language and expansive images that take the reader on a journey half way across the country on one of the earliest steam engines. Though the train remains central to the story, Floca also brings to life the people who help make train travel possible as well as the travelers.  Readers of various ages will enjoy this book from its rhythmic use of language including sound effects to its technical information on the workings of a train.  As Emmy turned the pages of this book, her eyes grew big as she took in the sweeping landscapes and the detailed drawings that make up Locomotive.

(2013) This Is Not My Hat ~ illustrated and written by Jon Klassen.
In a world of picture books that are extremely busy in color and detail, Klassen relays his story of a fish who snatches a hat from a bigger, sleeping fish, with a darkness that is intriguing and pleasing to the eye. Using Chinese ink, Klassen creates a sparse background allowing the simply drawn main character to come to life through subtle eye movements and a trail of small white bubbles.  Emmy finds humor in the various ways that the fish defends his choice of taking the hat..."It was too small for him anyway." 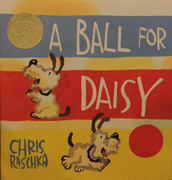 (2012) A Ball For Daisy ~ illustrated and written by Chris Raschka.
In this wordless picture book, Raschka chronicles a little dog's loss of his most prized possession - his ball.  As always, Raschka's illustrations convey the emotions of the characters perfectly.  You can feel the dog's joy and sadness.  The idea for this story came when his son's favorite ball was destroyed by a dog and the sense of loss this caused.  A Ball For Daisy is Raschka's second Caldecott Medal!  His first medal was awarded in 2006 for the book The Hello, Goodbye Window (written by Norton Juster) which is a delightful tale of a little curly haired girl, her Nanna and Poppy and the kitchen window. Emmy's favorite book by Raschka is Yo! Yes? a story of two boys and the friendship they form told in 16 words.

(2011) A Sick Day for Amos McGee ~ illustrated by Erin Stead and written by Phillip Stead.  In this tender tale of reciprocity and friendship, zookeeper Amos McGee gets the sniffles and receives a surprise visit from his caring animal friends.  Erin Stead's delicate woodblock prints and fine pencil work complement Philip Stead's understated, spare and humorous text to create a well-paced, gentle and satisfying book, perfect for sharing with friends.

(2010) The Lion and the Mouse ~ illustrated and written by Jerry Pinkney.  The screech of an owl, the squeak of a mouse and the roar of a lion transport readers to the Serengeti plains for this virtually wordless retelling of Aesop's classic fable.  In glowing colors, Pinkney's textured watercolor illustrations masterfully portray the relationship between two very unlikely friends.

(2009) The House in the Night ~ illustrated by Beth Krommes and written by Susan Marie Swanson.  Richly detailed black-and-white scratchboard illustrations expand this timeless bedtime verse, offering reassurance to young children that there is always light in the darkness.  Krommes' elegant line, illuminated with touches of golden watercolor, evoke the warmth and comfort of home and family, as well as the joys of exploring the wider world.

(2008) The Invention of Hugo Cabret ~ illustrated and written by Brian Selznick.  From an opening shot of the full moon setting over an awakening Paris in 1931, this tale casts a new light on the picture book form.  Hugo is a young orphan secretly living in the walls of a train stations where he labors to complete a mysterious invention left by his father.  In a work of more than 500 pages, the suspenseful text and wordless double-page spreads narrate the tale in turns.  Neither words nor pictures alone tell this story, which is filled with cinematic intrigue.  Black & white pencil illustrations evoke the flickering images of the silent films to which the book pays homage. 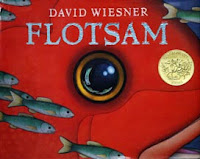 (2007) Flotsam ~ illustrated and written by David Wiesner.  Flotsam is a cinematic unfolding of discovery.  A vintage camera washed up on the beach provides a young boy with a surprising view of fantastical images from the bottom of the sea.  From fish-eye to lens-eye, readers see a frame-by-frame narrative of lush marinescapes ebbing and flowing from the real to the surreal. 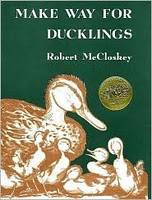 (1942) Make Way for Ducklings illustrated and written by Robert McCloskey.  The busy Boston streets are too dangerous for eight little ducklings!  But with a little help from a friendly policeman, Mrs. Mallard and her family arrive safely at their new home.  The public garden was no place for ducklings when they were first born, but now they are old enough to brave the raucous crowds and swim with the giant swan boats.

For a complete list of Caldecott Medal Winners and Honor Books from 1938 to present, go to the Association for Library Service to Children's website.

The Emmycott's are coming soon!!!