Autumn is my very favorite time of year.  The cooler days, colorful leaves and pumpkin everything brings me so much joy!  Emmy also enjoys this season, but it takes her a bit longer to make the transition from the hot summer days to the chillier weather.  We both look forward to our town's Fall Festival every Columbus Day (or Indigenous People's Day) weekend.  Our little New England town dresses itself up for the event.  Market Square downtown is decorated with corn stalks, hay bales and pumpkins. Businesses in town participate in the festival by creating a scarecrow and attaching it to our lampposts.  This is our favorite part of the festival.  We enjoy seeing all of the creative ideas used to build the scarecrows as some represent the business while others showcase a favorite character.

Here are some of our favorite photos from the past several years. 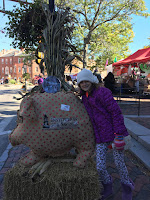 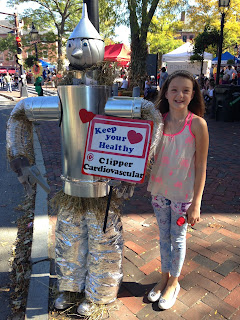 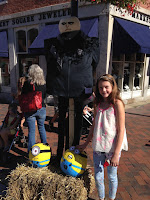 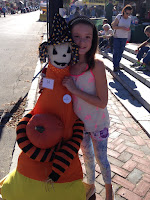 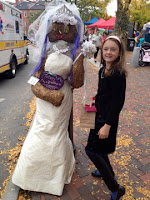 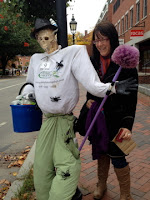 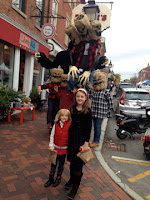 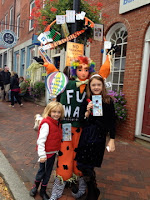 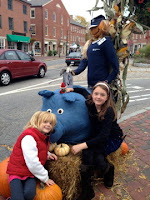 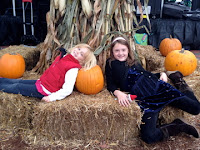 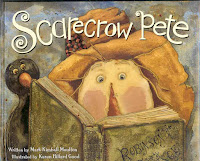 Before we go to check out the scarecrows, Emmy and I enjoy reading ~ Scarecrow Pete by Mark Kimball Moulton.  Now, before you think that this is a book to read during Autumn, let us tell you otherwise.  First of all on the opening pages, the reader is met with this quote, "Why, I can go most anywhere by reading a good book." These words set the stage for this most enjoyable book where a young boy discovers that the scarecrow in his family's cornfield can not only talk, but enjoys a good book! Moulton tells the story through rhyme in the form of a very long poem.  It is delightful to read out loud as the words just roll right off your tongue.

"Now this is nice," said Scarecrow Pete, "a beautiful fine day,
a brand-new friend to talk to, and my belly full of hay."
"A brand-new friend?  Do you have more?" I asked my
Scarecrow Pete.  "If you are always tied up here, how do you ever meet?"
"That's easy - I imagine them!  I meet friends, near and far.
I close my eyes and think of them, then poof!  Why, there they are!"
"I do the same to travel," he continued, with a look.
"Why I can go most anywhere by reading a good book."

And second of all, the young boy is on his summer vacation and doesn't think that he needs to read, but when the scarecrow asks him to read him a book from the suitcase by his knee, he hesitantly obliges.  As the boy reads many classic stories such as Moby Dick, Peter Pan, Wizard of Oz and Alice in Wonderland, he finds himself becoming a voracious reader.

"I never forget those days, that summer long ago, for that was when I
realized how much books can help you grow.  They teach, enchant and captivate,
enlighten and cajole.  They inspire imagination and they touch your very soul!"

To go along with the beautiful verse are the gorgeous illustrations by Karen Hillard Good.  Each page is filled from edge to edge with enchanting drawings in subtle colors.

Emmy is always delighted to see so many of her favorite books in Scarecrow Pete's suitcase especially another one of Moulton's books, A Snowman Named Just Bob, which we read every winter.  Emmy loves that the boy and the scarecrow become pen pals at the end and we both find ourselves loving the very last page in the book every time we read it. 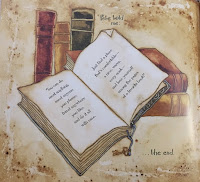 "You can do most anything, meet anyone you please,
travel anywhere you like, and do it all with ease.
Just find a place that's comfortable - a nice, warm cozy
nook - and lose yourself among the pages of a favorite book!"

Emmy and I would recommend any book by Mark Kimball Moulton, but since it's getting close to Halloween, be sure to read Miss Fiona's Stupendous Pumpkin Pies! 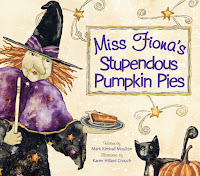 Posted by Amy Pertl-Clark at 6:08 PM No comments: 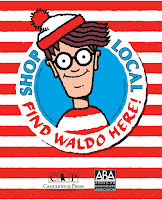 Emmy and I are on the search for Waldo all around Newburyport.  We have been having a blast visiting all of our local shops and searching and searching for a very small cardboard cut out of Waldo.  It has given us the opportunity to talk to the shopkeepers, see all the new merchandise and just enjoy our quaint little town.  A big shout out to The Book Rack Bookstore for hosting this event in Newburyport.  The search for Waldo is going on across the country during the month of July with chances to earn an I Found Waldo button, a $1 off coupon for a Where's Waldo book as well as the opportunity to be entered in a drawing for a deluxe set of Waldo books as well as other great prizes.  Contact your local bookstore to see if they are participating in Find Waldo Local. 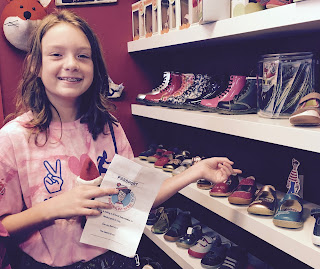 Update:  Here is the finished sheet.  Emmy was very determined to find every Waldo! 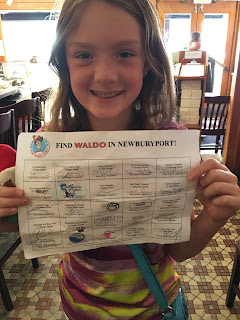 And Emmy used her $1 off coupon to purchase this Waldo book with her own money! 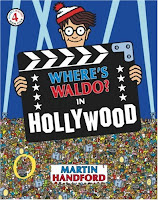 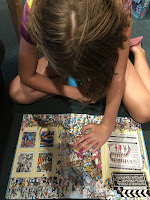 Oh and have you heard about the construction worker who is playing Where's Waldo with the children in a hospital across the street from his construction site.  See the article and video HERE.
Posted by Amy Pertl-Clark at 2:58 PM No comments: 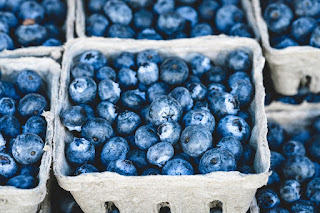 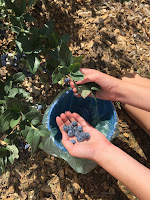 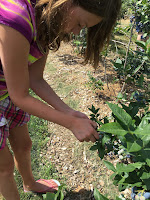 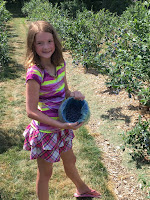 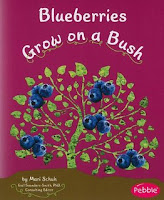 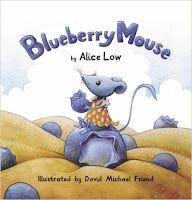 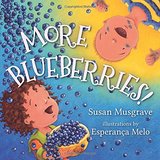 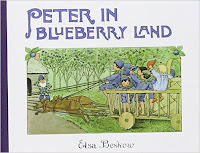 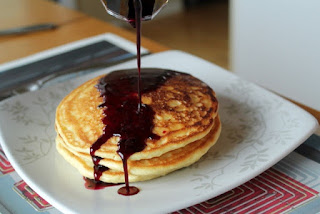 Blueberry Deliciousness!
Posted by Amy Pertl-Clark at 5:30 PM No comments: