Boston, Massachusetts is a vibrant city full of history and charm. Emmy and I can be in the heart of Boston in just under 45 minutes and we love it! We've discovered the Boston Children's Museum, the New England Aquarium, Faneuil Hall and Quincy Market, Mike's Pastry in the North End, Rose Kennedy Greenway, the Boston Common and the Public Garden. All of these sights are easily traveled by foot, but Emmy's dream is to ride 'The T' - Boston's subway system. Maybe the next trip! 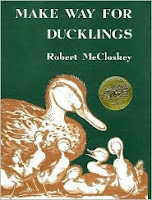 One of my all time favorite children's books is Make Way For
Ducklings by Robert McCloskey. It is a touching story of two ducks who search for the perfect place to build their nest and hatch their ducklings because just any old place won't do for raising a family of ducklings.
I've waited to share it with Emmy because I wanted to be able to visit all of the places that Mr. and Mrs. Mallard, and the ducklings visit. This past weekend was our duckling adventure and we had a fabulous time!
Here is a photo of 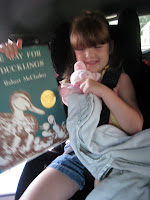 Emmy as soon as we got into the car to head to Boston. She was so excited to be going to the duckling's island! She listened intently as I told her what to expect on this adventure. How we would park underneath the Boston Common and visit the Carousel on the Common, swim and play in and around the Frog Pond, eat lunch at the Lily Pad Cafe and then cross
Charles Street and enter the Public Garden where we would ride the Swan Boats and visit the Make Way For Duckling's Statues. She chit-chatted with me the entire way about the book and wondered if we would see the featured police officer, Michael.
We had a lovely time riding the carousel and splashing in the Frog Pond, but entering the Public Garden was true magic! "Look Mommy! I see the Swan Boats." "Oh, look at all of the ducks." "Now where is that Mr. and Mrs. Mallard." "I see the bridge that's in the book!" Simply delightful! 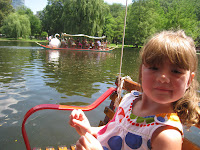 Riding on the Swan Boat was so much fun. I've done it before, but not with a child. Completely different. Children have a way of noticing things that adults simply don't. Such as, the way the duck's feather's shine in the sunshine, the sound of the boat as the driver pedals through the water, and the way the weeping willow trees are just touching the water. "Look Mommy - the trees are 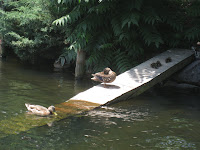 thirsty." The best part of the ride was seeing little ducklings on the ramp up to the little island. "I see Quack! I see Quack! Hi Quack. Hi Mr. and Mrs. Mallard!"
After the ride, we were off to find the statues of the ducks. The Public Garden is such a beautiful place to wander around. It is full of tucked away places perfect for the little ones. When Emmy 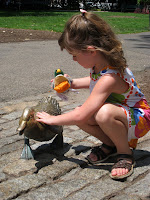 spotted the statues, she just took off and immediately went to the very last duckling and gave him a big hug. If
you haven't figured it out yet, Quack is her favorite duckling who follows 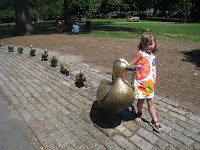 along behind Mrs. Mallard and Jack, Kack, Lack, Mack, Nack, Ouack and Pack to be last in line.
Be sure to share this brilliantly illustrated book with the little ones in your life. It will surely please them! As Emmy says, "This book is so special because it won a trophy!" Make Way For Ducklings was awarded the Caldecott Medal in 1941 for its distinguished illustrations.
Two thoughts by Robert McCloskey to end this post: 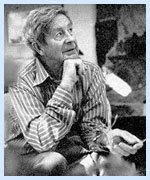 1) Mr. McCloskey often said that he didn't know anything about children's literature.
"I think in pictures. I fill in between with words. My first book I wrote in order to have something to illustrate."
2) Mr. McCloskey thought that while the hand was trained, drawing was really a way of seeing and thinking.
"Most of my friends and neighbors just don't seem to see as I do, even looking at simple things like a ball of string. But I'm not a nut, really, as anybody can see. I have one foot resting on reality and the other foot planted firmly on a banana peel."
Hope your foot finds itself planted on a banana peel!
Posted by Amy Pertl-Clark at 5:51 PM