This past Christmas, Emmy asked Santa Claus for a tutu. As she really wasn't one to perform, her Daddy 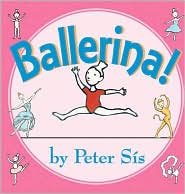 and I wondered where this idea came from. Silly grown ups! Of course the idea came from a book. Ballerina by Peter Sis had been in our collection for quite awhile before Emmy became attached to it, but once she did, her ballet aspirations took off at lightening speed! As a grown up who never experienced formal dance as a child, I was just as entranced as Emmy in this adorable book. It begins with a little girl coming home from school and immediately undressing and putting on her tights and leotard. From there her imagination soars as she digs through her dress up box and adds a few accessories such as a tutu, a turban and Emmy's favorite colorful
scarves. The most fun is to see the little girl look into her full length 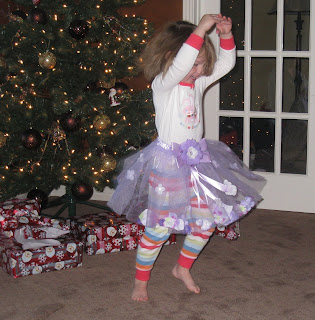 mirror and see herself as a mature ballerina dancing in a number of ballets such as The Nutcracker and Swan Lake. Emmy and I both love the way Peter Sis patterned the story beginning with a simple line-art illustration of the little girl in her colorless bedroom and continuing on with a two-page spread, the left-hand page giving a short descriptive sentence about the girl trying one colored item of a dance costume on and the right-hand page showing a corresponding imaginary view of the girl as an adult ballerina dancing in the complete costume along with a descriptive action word (stretch, reach, leap...). Ending with, as Emmy would say, "the best page ever" a fold out showing all seven of the previous ballerinas curtseying. As there aren't many books about ballerinas for young children, Ballerina is high on our recommendation list.

For our followers with a young boy, we haven't left you out. Check out Peter Sis' book Fire 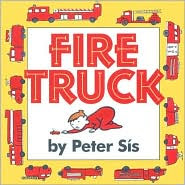 Truck for some fiery fun! In this book Sis celebrates a universally cherished childhood favorite—the fire truck—in simple, clean lines and smooth planes of color. And "the best page ever" for Emmy is a fold-out of the fire truck accompanied by a numbered list of items to look for that can be read as part of the narrative or returned to later as a find-and-count game.

In an interview with Barnes and Noble, Peter Sis shared a few anecdotes that I thought were fascinating and worth noting here:

"My first job in Prague was as a D.J. while still in art school. I did not take it seriously and perhaps, because of that, I ended up with a radio show, taping interviews in London with the Beatles, Led Zeppelin, and many others. I also flew around Europe as an emcee of the Beach Boys."

"I painted a real egg (decorated with a map) for the cover of Print magazine that caught the eye of Mrs. Jacqueline Kennedy Onassis, who was then an editor at Doubleday. This led to the book The Three Golden Keys. Then I received a phone call from the American Egg Board. They asked me to paint an egg for the White House. So, there I was, on Easter Monday, with my family, presenting a painted goose egg -- or was it a duck's? -- to President and Mrs. Clinton. One never knows!"

I think this is my new mantra, "One never knows!" Just put yourself out there and see what happens.