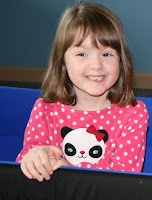 Emmy became her own event planner for her fifth birthday. The one thing she was absolutely sure of was that she wanted a Pajama Party! We have always held a birthday party for her in our own home, so when I agreed that a pajama party would be a lot of fun and started telling her what we could do at home, Little Miss Party Planner informed me that the party would be held at Play Makers Family Enrichment Center (check it out here) where I have been working a few mornings a week. Emmy enjoys coming with me when I teach a play group at Play Makers. This really is the perfect place for a party...room to play, cook and do art projects.

The first thing Emmy looks for when she gets to Play Makers is which swing is hanging in the Mobility Studio. Luckily on the day of her party the boat swing was hanging, 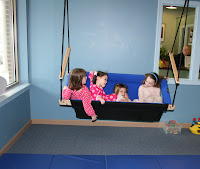 which is her favorite swing. Here she is swinging with a few of her friends.

In addition to playing, Emmy and her friends did some cooking during her party. They made chocolate chip pancakes and banana 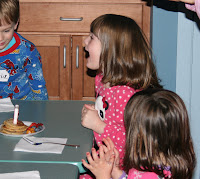 milkshakes. Both were delicious. Seeing her number five candle sitting on top of a stack of pancakes was a great surprise. It was such fun to see Emmy surrounded by her friends and all of them really enjoying themselves.

After cooking, Emmy and I shared the book that inspired her pajama party - Polly's Pink Pajamas by Vivian French with illustrations by Sue Heap.

Emmy LOVES wearing pajamas and would much prefer wearing
them everyday/everywhere than anything else in her closet. She also

loves the color pink so this book was a great match for her. Emmy laughs as Polly enlists the help of her friends to find an outfit to wear to Fred's party. When Polly takes a look in the mirror and sees her mismatched outfit, she becomes sad, but not for long. Fred calls to find out why Polly is not at his party and quickly informs her that it is a PAJAMA PARTY!

"And what do you think Polly wore to Fred's party?
PINK PAJAMAS!"

After the story, Emmy and her friends each decorated a pillowcase with fabric markers. Emmy thought this would be a great project because then she could share her sweet dreams with all of her friends. 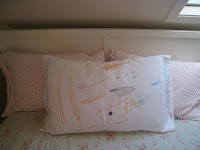 Here is Emmy's pillow front and center on her bed. She decorated it with shooting stars!

All in all having a party at a location other than home was wonderful. There was lots of room to move and play and absolutely no set up or clean up. I actually got to engage in the activities and feel a part of the party rather than worrying about each little detail.