I began this post about our favorite Christmas books on December 4th. It is now December 15th - 10 days before Christmas! This time of year always goes by so very fast even with efforts to SLOW THINGS DOWN!
What's wonderful about this year's holiday season is that Emmy really gets it. She is full of anticipation and talks non stop about Santa Claus and his upcoming arrival. With our move to Massachusetts, we are both hoping for a white Christmas this year.
Part of our holiday decorating this year has been putting our Christmas books into beautiful baskets. We have a rather large selection and Emmy and I wanted to be sure to share with you our favorite Christmas books before the season is over!
First on our list is Mr. Willowby's Christmas Tree by Robert Barry.

This book was written in 1963 and is one of my all time favorite
Christmas stories. It begins with wealthy, old Mr. Willowby's too tall Christmas tree and trickles down to the smallest mouse in the house.
Then Mistletoe Mouse just happened to see that tiny tip of a Christmas tree. He pulled it through the snow and
ice...up some stairs...he fell down twice! At last he reached his cozy house. "It's just the right size!" said Mrs. Mouse. Then at the top, if you please, they put a star made out of cheese.
Mr. Willowby's Christmas Tree was also produced as a television Christmas special in 1995 starring Robert Downey, Jr. and The Muppets. Here's a clip of the opening song which was nominated for an Emmy.
I would love to show this to Emmy in its entirety, but can't find it! Come on TV stations, bring back Mr. Willowby's Christmas Tree to the holiday lineup!
Second on our list of favorites is Harvey Slumfenburger's Christmas Present by John 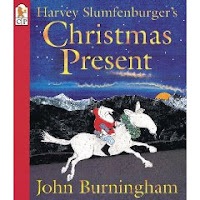 Burningham. As Santa is retiring for the evening, he notices one present left in his sack. With the reindeer exhausted, Santa enlists the help of several people, from an airplane pilot to a mountain climber, in order to deliver the present to Harvey Slumfenburger before Christmas morning. Emmy loves to say the following words along with me:
My name is Santa Claus. I still have one present left in my sack, which is for Harvery Slumfenburger, the little boy who lives in a hut at the top of the Roly Poly Mountain, which is far, far away.
And it will soon be Christmas Day.
John Burningham's illustrations are exquisite. Emmy's favorite picture is the one of Santa Claus finally arriving at Harvey's hut.
"Mommy look how beautiful the sky looks. I think the sun is coming up. Santa just made it!"
Third on our list is Redbird at Rockefeller Center by Peter Mahoney and Felicia Zekauskas.

Told in a rhyme reminiscent of Dr. Seuss this book tells the story of a giant spruce found in the yard of Kate and her mom.
There once was a tree of a height to astound that people could see for
miles around. It towered above the house of a lady who found it too tall and overly shady.
With a phone call from the mother, the tree becomes the famous Christmas tree towering above the ice skaters at Rockefeller Center. Only Kate knows that hidden among the branches is a redbird and is heartbroken that the tree has been cut down. Luckily the holiday season is a time of magic and miracles, and with the help of the tree's ornaments (redbirds - of course), the lonely redbird and the tall spruce make their way back home again. The illustrations humorously show the hustle and bustle of New York City during the holiday season. Emmy's favorite drawing is of the mother. She just cracks up at her hairdo - a rather tall beehive!
Last on our list is Who'll Pull Santa's Sleigh Tonight? by Laura Rader. This is a sequel to

Santa's New Suit, which is also a great holiday read. When the reindeer all come down with colds, Santa needs a back up plan and quick. He decides to hold auditions in order to find stand ins. A large crowd gathers to try out including ducks, rabbits, monkeys and an elephant, but none was right for the job. Next, Santa tries his own invention, but that doesn't work out either. When Mrs. Claus suggests bringing him a cup of hot cocoa to make him feel better, they both know just what to do. HOT COCOA! After the reindeer drink Mrs. Claus' hot cocoa, they stop sniffling and sneezing and are ready to fly!
Hot cocoa for all and to all a good night!
Emmy just laughs and laughs at the antics of the characters in this story and wants me to read the "talking bubbles" over and over again. Included is the recipe for Mrs. Claus' hot cocoa! We are looking forward to reading the next book in the series...When Santa Lost His Ho! Ho! Ho!

Emmy and I hope that this holiday season brings you joy, love and laughter.
HAPPY HOLIDAYS!
Posted by Amy Pertl-Clark at 6:33 PM