Goldie and the Three Bears

It's always fun to read a different version of a classic fairy/folk tale. When I taught second grade, adaptations of well-known stories were always a big hit. The kids were so impressed with how you could rework a story to create something new. This always sparked a lot of ideas for use during writer's workshop. 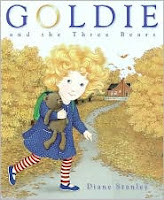 To my delight, Emmy and I discovered Goldie and the Three Bears by Diane Stanley. In this version a little girl is looking for a just right friend! When her parents encouraged Goldie to invite a friend over and reminded her that "Nobody's perfect." she had a very difficult time because she knew exactly what she liked and what she didn't. "Goldie didn't want somebody perfect. She just wanted someone she could love with all her heart." One day when Goldie gets off at the wrong bus stop, she discovers a cute little house at the end of a tree-lined lane. In typical Goldilocks fashion, she enters the house and tries out three sandwiches (loving the third sandwich of peanut butter, with chunks, white bread, no jelly and no crusts), three chairs and three beds. When she is awoken from her nap on the just right bed, she is amazed to be find herself flying into the air. "Whee!" said Baby Bear. "Whee!" said Goldie. "Stop it," shouted the other bears. "You'll break the bed." Being very understanding, the bears invited Goldie to stay and play and she did discovering a friend that is just right! Emmy loves when Goldie and Baby Bear are bouncing on the bed and delights at the illustration on the last page where there are two photos in frames...one of Goldie and one of Baby Bear both in the same green dress with a yellow flower on the front. When I ask her which friend she loves with all of her heart, she always responds, "My Beshaboo." referring to her best friend in Austin, Texas. We love you Besh!!! 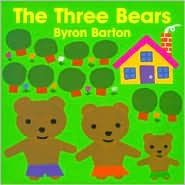 After reading this book, we searched for the very first version of Goldilocks and the Three Bears that Emmy and I read when she was (as Emmy says) "just a baby" - Byron Barton's version titled The Three Bears. I've mentioned our love for Barton's books in a previous post. Going back to reread books that we love is really important to us. I always tell Emmy that books are the most precious gift as they allow us to go so many places in our imaginations.
I've traveled the world twice over,
Met the famous; saints and sinners,
Poets and artists, kings and queens,
Old stars and hopeful beginners,
I've been where no-one's been before,
Learned secrets from writers and cooks
All with one library ticket
To the wonderful world of books.
~ Anonymous ~
By the way, Emmy and I love the song from the Page Cavanaugh Trio titled The Three Bears. If I could figure out how to upload a music file, I'd have it here for you, but alas my computer skills are failing me!!!!
Posted by Amy Pertl-Clark at 8:32 AM