Halloween is just around the corner and answers to the question, "What are you going to be for Halloween?" can be heard all around me.  I have always been inspired by characters in books when it came down to creating a costume.  When I taught elementary school, celebrating Halloween through book characters was the way to go.  One year I was Ms. Frizzle from the The Magic School Bus series followed by The Rainbow Fish the next year, another year I was the tree in Chicka Chicka Boom Boom and even portrayed Miss Nelson from Miss Nelson is Missing! with a costume change midday to Miss Viola Swamp.  Somewhere among my teaching memories are photographs of these costumes.  As going through my storage unit in search of these photos is not on the agenda today, I am instead including some photos I found on the web that might inspire you to become one of these characters. 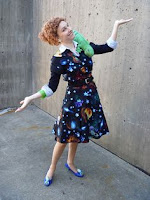 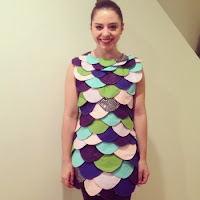 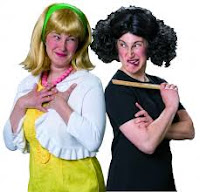 Another great time to dress up as a book character is during Children's Book Week.  Usually celebrated at the beginning of May, it's a great time to to bring books to life in your classroom or at home.  I remember one year when a little girl in my class came dressed as the main character in The Bad Case of Stripes.  Her mom meticulously painted stripes on her face, neck and arms.  She wore striped tights, a pink dress and a bow in her hair. It was awesome!  Here are two inspiring photos found on the web of that idea.

Emmy's early Halloween costumes were inspired a bit by book characters as well as her personality. On her first Halloween she was Tigger.  This was inspired by her bouncy time in Mommy's belly and her need to move throughout her early months as well as our love of all things Winnie the Pooh.  Next up was a lion inspired by the book The Happy Lion (she loved exclaiming, "Bonjour Happy Lion" and "Au Revoir Happy Lion") as well as her ability to ROAR on command.  On her third Halloween, Emmy was a clown inspired by a recent trip to the circus as well as the book Circus Caps for Sale (she loved the page where the clowns were using the caps in their act).  Click HERE to see photos of Emmy on Halloween as well as read our post about one of our favorite Halloween books - Monster Needs a Costume.

Stay tuned for Costumes Inspired by Children's Books - Part Two which will highlight some more character costumes from our favorite children's books!