Anyone following familiar with Charley Harper? If not, then you are in for a real treat. I first came across his work last summer while browsing through a local boutique. I certainly wasn't there to look at books, in fact I was hoping to find a cute pair of shoes for Emmy, but instead I noticed an interesting book cover that stopped me in my tracks. 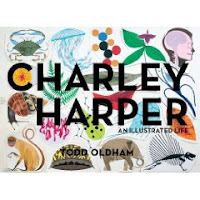 I took the book, Charley Harper: An Illustrated Life, to a corner of the shop and sat admiring the illustrations for the better part of an hour. WHOA! I was so impressed with this Harper man and delighted that Todd Oldham had taken the time to honor this man's work in a beautiful coffee table book. As much as I wanted to take this book home with me, I had to leave it behind due to the price tag of $150.00 (one day this book will be mine). When I returned home, I researched Charley Harper and found out that he is a much admired artist in the world of modern art and design. He is called an American original and is beloved for his delightful, graphic, and often humorous illustrations of nature, animals (especially birds), and insects. His inspiration came from the woods behind his home where he would walk and sketch daily. Mr. Harper liked to say that when he painted a bird, he didn't count all the feathers in the wings -- he just counted the wings. In a style he called "minimal realism," Charley Harper captured the essence of his subjects with the fewest possible visual elements.

Here is a glimpse into the world of Charley Harper:


I was also pleased to find out that his artwork was available in a board book for children. SCORE! ABC's by Charley Harper was quickly added to Emmy's book collection. (I wonder

when Emmy will realize that this is really her Mommy's collection!) Now I could admire his work every day while introducing a new artist to Emmy. As with all of our books, this one was out of circulation for awhile, but it found its way back in when we discovered a bird's nest outside of our balcony. The nest reminded Emmy of the book and we eagerly looked for the pages B is for bird and N is for nest - simply delightful.

Of course I am on a mission to collect all of Charley's work and maybe acquire his best known children's book The Golden Book of Biology published in 1961 - vintage and pricey, perhaps I'd better hope that it will be reissued one day!

Beguiled by the Wild