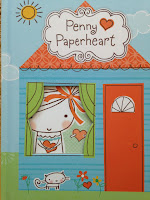 "Sharing happiness one heart at a time" is the sweet message from the adorable Penny Paperheart.  Little Penny made her debut as a doodle on a greeting card for Hallmark, but is now a character in her own book Penny Paperheart that is followed by many "Hallmarkers" - apparently this is the term for people who shop frequently at Hallmark. Now you can find Penny merchandise, such as Penny Playsets, at all Hallmark stores as well as online that give a whole new feel to paper doll play.  Also on Hallmark's website are cute videos starring Penny and her friends as well as downloads that include coloring pages, finger puppets and paper hearts to share. Follow this link for some Penny Paperheart fun (the videos are about half way down the page)!

The book Penny Paperheart was left for Emmy a few months ago by the fairies who visit the little fairy houses that she makes around the house. Let me explain...Since we live in an apartment on the fifth floor, we don't have direct access to the outdoors, so collections of nature items can be found in Emmy's room.  These items are often made into little fairy houses that cannot be taken down until evidence of a fairy visit are found.  So, unbeknownst to her, I leave evidence of their existence. Sometimes I simply rearrange the little house, but other times I leave little trinkets hidden in her fairy houses.  Trinkets such as a pretty rock, a polished stone, an interesting seashell, a handwritten note or something a bit bigger like this book.  It brings me much joy that Emmy still believes in fairies and it is such a relief when the fairy house is put away and vacuuming can commence once more!

I must share the back story to Penny Paperheart, as stated at the end of the book, as it is one of friendship, collaboration and inspiration.

One day an artist named Terry Runyan drew a little doodle.  She gazed at the little gril she sketched and then began to noodle.  Isn't she cute?  Who could she be?  Terry continue to think, then showed her sketch to her talented friend whose name is Mary Fink.

Mary thought Terry's charming sketch was oh so very sweet, so Mary designed the girl's paper town and when it was complete Terry and Mary thought to themselves, "It's time for her to be named" "Not just a name, she needs a story!" the two artists both exclaimed.

Andre du Broc is a writer friend.  Playing with words is his art.  When he saw their little sketch he squealed, "She's Penny Paperheart!" The three friends loved their paper girl and that love just grew and grew.  Penny Paperheart had a name but not a thing to do.

That's when their dear friend, Stacy Lamb, offered a bit of advice:  "She gives away her paper hearts - that's what makes Penny so nice!" And that's how four devoted friends all played a wonderful part in bringing to life a paper girl named Penny Paperheart.

After our first reading of Penny Paperheart, Emmy went off and gathered art supplies and began making hearts with notes on them to share with family members, friends and the neighbors in our apartment building.  Emmy highly recommends this book to readers of all ages as she says, "Penny is so cute and when I read her story, I want to be kind to everyone."  We hope that you will have a chance to get to know Penny and spread kindness to those around you. 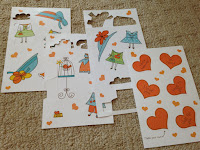 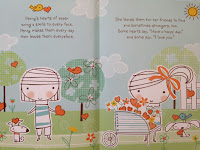 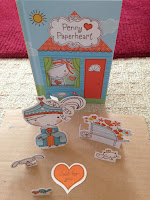