Celebrating Poetry and the Outdoors 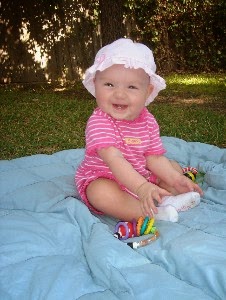 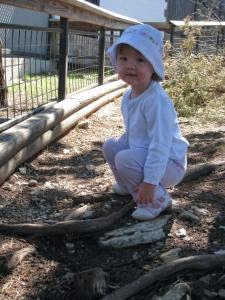 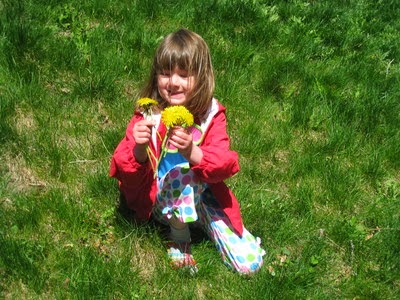 Being outdoors has always been Emmy's favorite thing to do.  From a very young age, her curiosity led her to explore nature in wide open spaces and in little nooks and crannies. Today Emmy still enjoys being outside, but I am starting to see a difference in how she relates to nature.  The magic of fairies and gnomes hidden amongst the flowers and leaves is disappearing and in its place is more of a scientific approach to life around her.  I hear things like, "Did you know that sand is made up of millions of tiny rocks?  Did you know that the anther is the part of the flower that produces pollen?  Did you know that there are more than 1,500 active volcanoes on Earth?"  I know that these facts are important and am grateful that she is interested in learning these things, but I am a believer that life is magical and will continue to encourage her to look at things in a variety of different ways (not black or white).  For example, we know that an orb web is made of spirals and is used to catch prey, but seeing an orb web in the early morning mist is magical as the first rays of the morning sun hit its spirals and creates shimmers of gold.

Emmy has attended a Montessori school for the past six years (pre-school through second grade). Going out and exploring nature has always been a part of her school day.  It is understood that fresh air along with children's natural desire to explore their surroundings is beneficial to their growth and learning. Montessori believes that to delight in the wonder of the natural world at a tender and impressionable age is to become a steward to the earth in the years to come. I will be forever grateful to all of her Montessori teachers for gifting Emmy with the awareness that nature doesn't belong to us, but rather that we are responsible for its care. 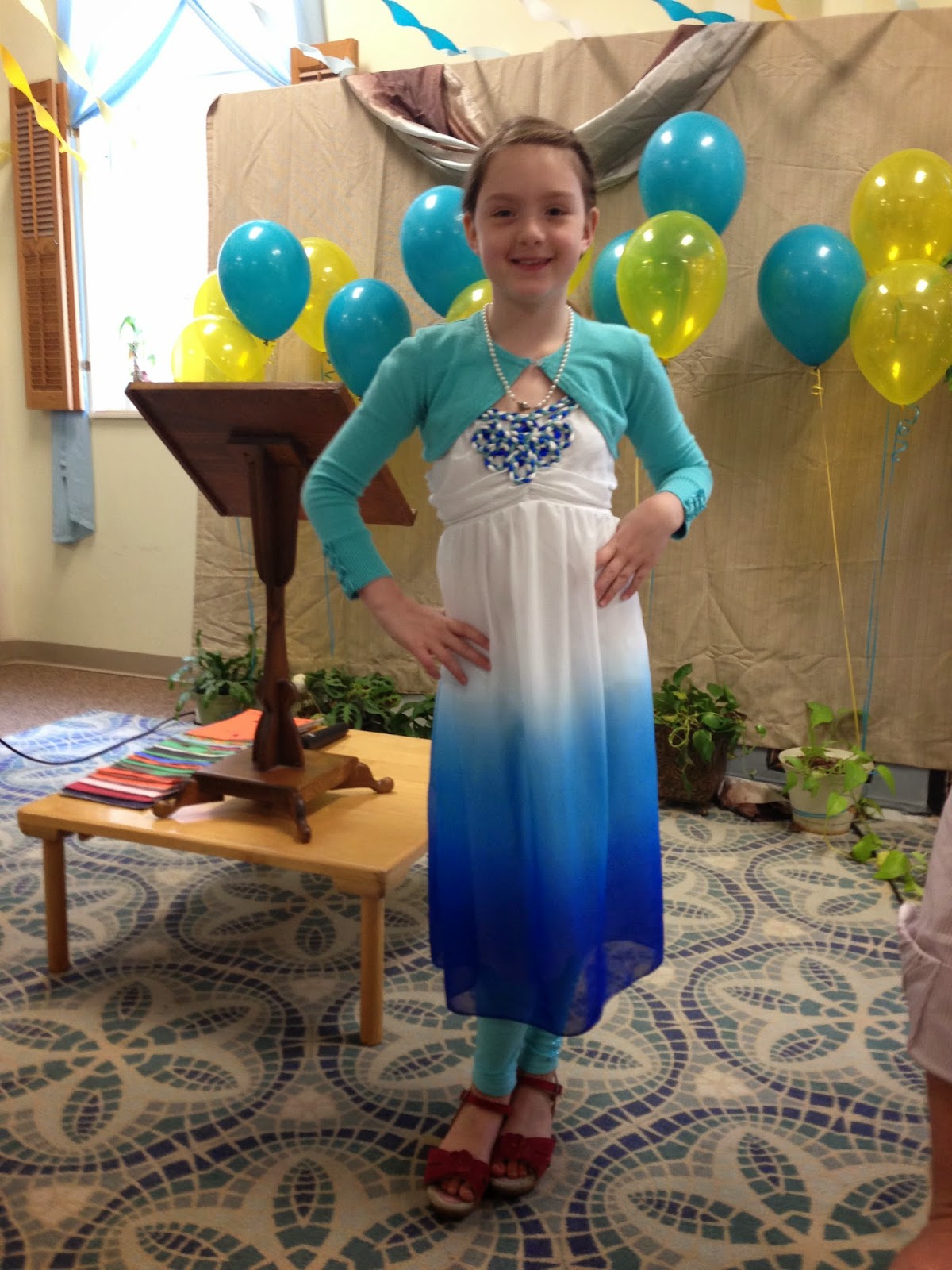 This past school year, Emmy spent a lot of time immersed in poetry.  It wasn't just a unit to teach, a box to be checked off, but rather a time to delve into the beauty of words - sweet, juicy, interesting words.  Through read alouds, the poems came to life begging Emmy to dive in.  Through writing, poetry became a way for Emmy to express herself.  By using mentor texts, Emmy began to understand the different ways that poets put words together. Through reciting poems, Emmy realized that the rhythm and rhyme of poetry was a fun way to play with words.  Through drama, Emmy took her love of poetry to a dramatic level by creating little skits to go along with the poems.  In the spring, the children helped to organize a Poetry Tea as a celebration of all that they had learned.  From the invitations to the set up of the classroom, the children were involved in the process.  It may have been lacking a smoky atmosphere and the adornment of berets, but it felt very "beatnik" anyway.  The children each took a turn reading from their hand sewn poetry books where they had written five types of poems such as a couplet and a diamante.  The look of pride on their faces as they stood before a large group of adults and read their poems was a joy to witness.  Also part of the Poetry Tea was food and drinks.  When we arrived, Emmy greeted us and showed us to our table.  She then went and got the snacks and served us hot tea with honey, lemon and/or sugar.  It was such a sweet celebration.  Emmy continues to find poetry wherever we go from noticing words that rhyme to making very poetic remarks such as, "Doesn't the color of the sun have a shade as deep red as a beautiful Poppy in spring."  When she carries what she has learned in school into her day to day life, I know that learning has really occurred. A love of poetry has truly been instilled in her being and I, again, thank her teachers for helping to facilitate this love.  Please take a moment to watch this video of Emmy as she reads her poems at Inn Street Montessori's Lower Elementary Poetry Tea.

Ever since her work with poetry at school, Emmy has become interested in books that hold collections of poems.  We have quite a collection of poetry books including Robert Frost, Emily Dickinson, Shel Silverstein and Mattie Stepanek.  Stepanek has been described as a peacemaker, a philosopher and a prophet.  He suffered from a rare form of muscular dystrophy and died in 2004 at the age of thirteen. His poems are full of messages of peace and love.  Stepanek called his poems heartsongs.
"A heartsong doesn't have to be a song in your heart, " he said.  "It doesn't have to be
talking about love and peace.  It can just be your message.  It can be your feeling.
Some people might even call it a conscience."
At a very early age, Stepanek developed his personal life philosophy summed up in the following quote,                                              "Remember to play after every storm."
You can read more about Mattie Stepanek and his books of poetry and essays titled, Heartsongs, (all NY Times bestsellers) on his website.

With Emmy's love of the outdoors,  I searched for poetry books that focused on nature. These two books stood out as winners. 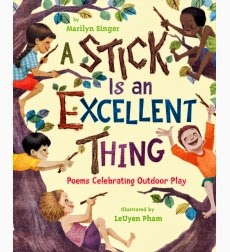 The first one is A Stick is an Excellent Thing (poems celebrating outdoor play) by Marilyn Singer with illustrations by LeUyen Pham.
This book of poetry celebrates universal types of play that are timeless and engaging no matter what generation is participating.  From organized games like jumping rope, hop scotch and hide-and-seek to imaginative games like making mud soup and turning sticks into magic wands, the poems held within these pages invite children to join in the fun.

A Stick is an Excellent Thing

It's a magic wand, It's yours to fling,
To strum a fence, to draw the sun,
A stick is an excellent thing,
If you find the right one. 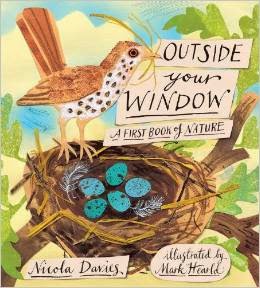 The second one is Outside Your Window (a first book of nature) by Nicola Davies, illustrated by Mark Hearld.  Hearld's juicy layered collages bring the poems to life.  Davies, a zoologist and best known for writing books about science, finds a way to bring amazing facts and fun things to do in her poetry writing. The book cycles through the seasons with a good number of poems focused on each one.  I like that the poems do not always follow a rhyming format, but instead bring about vivid images through colorful language.
Honey
Buzzzzzzz zzzzzzzz
It's coming from the beehive
It sounds like sweetness
And the sleepy, sleepy summer

Hmmmm mmm
The bees bring nectar from the flowers
For miles around and in the hive,
They make it into honey.

Buzzzzzzz zzzzzzzz
Hmmmmm mmm
The sound of sweetness and the smell of flowers
Of sunny, sleepy summer -
The sound of honey.

Emmy and I hope that we have inspired you to enjoy the poetry of nature!  I leave you with a quote by one of my favorite philosophers and the person that my Emmy is named after, Ralph Waldo Emerson.
"Nature always wears the colors of the spirit."