Move Over, Rover! by Karen Beaumont, with illustrations by Jane Dyer, is Emmy's favorite book at the moment (mine, too). The sweet and gentle dog, Rover, is enjoying a bone in his doghouse when a thunderstorm comes along. 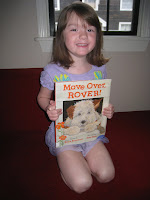 Generously, Rover allows some other animal friends (cat, racoon, squirrel...) to seek shelter in his doghouse to keep warm and sleep through the storm.

"Squirrel's in the doghouse,
sleeping through the storm...
Blue Jay's looking all around
to find a place that's warm.
Squeeze in, squirrel!
Make room, Racoon!
Skit-scat, Cat!
Mover over, Rover!"

When Emmy and I read Move Over, Rover the first time we missed a very important part of the story shown in the illustrations - a skunk hiding behind the doghouse who slips inside when Rover goes out to check out the rain. The skunk is snuggled inside as all the other animals find warmth in Rover's house. Skunk's fur can be seen (if you look closely) in all the pictures and when the inhabitants in the overcrowded house suddenly catch a whiff of something they all skitter, scatter leaving skunk comfortably sleeping through the storm. The story ends with the sun shining and Rover once again chewing on his bone in his doghouse very happy that he's alone.

Hearing Emmy read this story is simply delightful. Her favorite line is "Skit-scat, Cat!" She always wants me to read the back jacket flap where it is shared that Move Over, Rover was inspired by Karen's childhood in Oregon when one rainy night her dog let a goat into the house 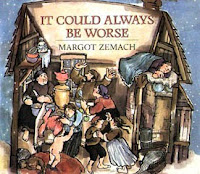 and she found them both curled up on her parents' bed!!! Emmy likes to imagine how many animals could fit inside her house which makes me think that I should share Margot Zemach's book It Could Always Be Worse which tells of a family complaining about their crowded and noisy house and the interesting advice that a wise Rabbi gives to them.

Emmy and I have been enjoying this poem by Ken Nesbitt about a "watch dog."

My dog is not like other dogs.
He doesn't care to walk,
He doesn't bark, he doesn't howl.
He goes "Tick, tock. Tick, tock."

He beeps each day at half-past nine.
At noon he starts to chime,
I have a strong suspicion
that my dog can tell the time.

Another dog might run and play,
or smother me with licking,
but my dog just annoys me
with his beeping and his ticking.

Should you decide to buy a dog,
consider my remarks:
When looking for a "watch dog,"
get yourself the kind that barks.
Posted by Amy Pertl-Clark at 5:25 AM