Both Emmy and I are excited to share the book, Thank You Bear, with you! It is written and illustrated by Greg Foley. We feel a kinship with Mr. Foley because he grew up in Austin, Texas.

Thank You Bear is the gentle story of a bear who finds a treasure that he thinks will be perfect for his friend Mouse. It goes along with the old saying "One man's trash is another man's treasure." as Bear finds great value in the object, but begins to feel differently as he shows it to some of his other animal friends.

"On his way to find Mouse,
he showed it to the monkey.
Monkey said, "That's not so great."
He showed it to the owl.
Owl said, "I've seen those before."
Foley's illustrations are so soft and serene. They are a pleasure to look at. Emmy noticed right away, through Bear's face and posture, that he was becoming discouraged by his friend's words. We think all children can relate to Bear as he sits wondering if his treasure is so great after all. Our lives can be full of discouraging words, but as often happens, someone comes along to give us the encouragement that we need as Mouse did for Bear.

"Then Mouse crawled inside the empty box and said,
"It's the greatest thing ever!"
Foley makes the reader wonder about the contents of the box, but it is on this page that it is discovered that the treasure is the box itself and is the perfect snugly place for Mouse.

After reading this book many times, Emmy found her little mouse, her special bear and a tissue box and started to act out the story. I made copies of the other animals in the story to add to her retelling. Here are the props: 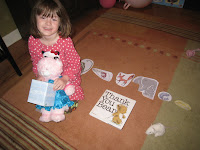 And here is Emmy acting out the story Thank You Bear:

Foley has written two more books about Bear that Emmy and I are excited to read. Both sound perfect for Springtime!
Don't Worry Bear