When I Was A Girl...I Dreamed 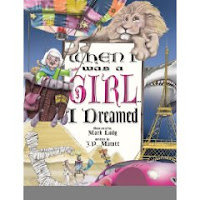 Emmy's Aunt Karen bought the book, When I Was A Girl...I Dreamed, for Emmy when she was just a baby. The illustrator, Mark Ludy, lives in Colorado which allowed Karen the opportunity to meet him and have the book autographed with the inscription "Aunt Karen believes in you."

This beautiful story is written by Margaret Baker & JP Matott and follows the memory of an old woman as she reveals her past dreams. She is seen dancing The Nutcracker, painting in Paris (a favorite page for Emmy), living in a castle surrounded by a moat, being the archaeologist to uncover the tomb of the five kings, and restoring law in the Wild West. As the dream-telling is told, the reader may catch a glimpse of some mementos of the girl's adventures, bringing to question whether or not those dreams came true, but leaving no doubt that the woman still dreams.

"When I was a girl, I dreamed great dreams of who I'd be and where,
of places near and journeys far, adventures wild and rare."
"Yes, as a girl I dreamed great dreams. Perhaps you dream them too.
Reach higher than the stars, my dears, and your dreams...will come true."
This book would make a wonderful gift for a girl young or old. As found in the inside flap of the book jacket, "Come young, come old and dream. Whether for the first time or once again."

I love this little tidbit about how Mr. Ludy got started drawing (excerpted from Mark Ludy's bio on his website).


You know how children can never sit still in a restaurant – always squirming around asking every two minutes when the food is coming. Well, clever Dad Ludy used to draw something on a paper napkin – like eyeballs or a goofy grin – and then passed the napkin to Mark, who added something else to it – maybe the nose with lots of hair and warts. The two passed the napkin back and forth until they had finished the drawing. The drawings always became a competition with Mark and his dad each trying to beat the other by making the funniest part of the picture. And, that’s how Dad Ludy showed Mark how much fun drawing can be. Boy! Did he have fun with it. He even went as far as making his homework look like works of art – handing in assignments with little scenes on the side of the page – like people climbing up the side with bears waiting hungrily at the top. 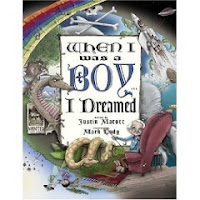 And just as beautifully done is the companion book titled When I Was A Boy...I Dreamed written by Justin Matott and illustrated by Mark Ludy.

Inspire the heart of the special boy or girl in your life by adding one or both of these books to his or her personal library.

Email ThisBlogThis!Share to TwitterShare to FacebookShare to Pinterest
Labels: dreams