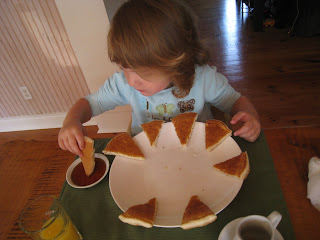 As mentioned in my last post, Emmy LOVES pancakes for breakfast, lunch or dinner. This photograph shows the particular way that Emmy wants her pancake to be served - cut into triangles with 100% maple syrup on the side for dipping.

With our recent move, I have been finding the most amazing books that I had completely forgotten about. Pancakes, Pancakes!

by Eric Carle is one of those books. With bright collage illustrations, the story allows the reader to tag along with Jack as he gathers all of the things that his mother will need to make his requested breakfast of pancakes: flour, an egg, milk, and butter. What delights Emmy and me about this story is that it shows the process by which the flour, egg, milk and butter must be obtained. Jack must go to the wheat field and cut the wheat then take it to the miller where he has to thresh the wheat to separate the grain from the chaff and then grind the grain into flour. Jack must go to the hen house to gather the egg and find the cow in order to milk her. The cream from the milk needs to be churned to make it into butter.

This process is a bit foreign to this family of boxed mixes so being able to show Emmy where each ingredient of her pancake batter came from is intriguing to all of us. It's also great to see the old fashioned tools and supplies that are used. And the best surprise of all is a photograph of Eric Carle on the inside of the back cover wearing a chef's outfit. Apparently, Mr. Carle's secret wish (if not writing and illustrating books for children) is to be an executive chef at a large, renowned hotel kitchen. He admits to not being a great cook, but can prepare a few dishes when called upon like his delicious pancakes that his mother showed him how to make when he was a boy. The recipe is included with a few tips to make the pancakes the best ever. Emmy loves to help in the kitchen and always mixes the pancake batter herself. She will be delighted to try this recipe by one of her favorite authors and illustrators. Bon appetit!
Posted by Amy Pertl-Clark at 9:30 AM